The Longest Day. It might be long & happy or long & heavy, but for one reason or another, some days leave a deeper mark in our experience. At times so much that a single day can fill the emotional space of a week or more in our memory log. And yet, every day has the same number of hours, minutes, seconds. Every living person is allotted an equal amount of time, day by day. So what would make a day – a long day?

A few months ago I experienced a really long day. It was exciting and hard and contained some of the most adrenalin-packed moments I've had on a bike. And yes, it was a long day measured in hours awake and hours spent on a bike, but what really made it stand out was probably the vast span of different emotions crammed into a relatively short time. From the lowest lows to the highest highs.

At 5.30 in the morning we rolled out from our little hotel in Sault, Provence, with the aim of climbing the Mont Ventoux and one of the toughest stages of the Tour de France. We were a group of six riders from five different countries. Different personalities, different languages, different strengths, different riding styles and different singing abilites (yes, because when the going got tough – we sang!). Mentally I knew I was up for it. Physically, though, I wasn't entirely sure I actually had the strength to pull it through, no matter how strong I felt in my mind. Coming from a flat area in southern Sweden I'm not very used to climbing hills, let alone mountains, so with little to no previous experience I couldn't know exactly what those legs were made of. I knew I could go long, but could I go high? I would simply have to find out. 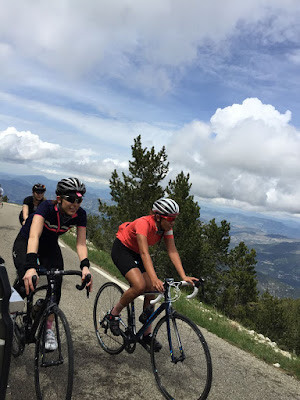 The number of elevation metres crammed into each kilometer was somewhat ridiculous and for the first time I had a sense of panic on the bike – surely the road must flatten out a bit after the next bend? But for many kilometres the average grade stayed persistently around 10 % and our only option was to keep pedalling lest we fall off our bikes. I remember celebrating when every now and then I hit the 10 km/h mark, thinking I was going pretty fast.

There were also moments when we lost ourselves completely in the beauty and drama of our surroundings where every atom was spectacular in its own right. We passed fragrant lavender fields and vineyards with trees in perfect order. Before we hit the Mont Ventoux proper we went through a lush gorge, the narrow road winding its way along drastic drops and steep mountain walls, sometimes disappearing into a short, dark tunnel through the rock. We met a fox and we stopped at a sleepy cafe for coffee and some boule playing. Every impression intensified by the task ahead – defeating the mountain.

Just over halfway to the top a lack of salt and magnesium, combined with cold, wet clothes after a short shower briefly sent me into an emotional and physical dip. Thankfully we stopped at a little restaurant some five kilometres from the summit and I was able to warm myself by the fire, change some clothes and get a bit of salt into my system. When we set off again we left behind the thick forest that had covered the mountain so far and ventured into the barren, moon-like landscape that stayed with us all the way to the top. From a distance we saw the weather station at the summit – the landmark I had seen on so many videos and pictures before we went. With every serpentine bend it played peek-a-boo with us, gleefully luring us on.

Suddenly everything in me reacted and adrenalin was rushing through my body like I’ve never experienced before. The change from just minutes before was drastic. I felt completely euphoric and in a second I knew I was SO going to finish this ride, strong and happy and on top of the world. The last kilometres before the summit were some of the steepest ones, and in a way the hardest, but there and then I didn’t want to change anything. I was full of adrenalin, content and happy, extremely tired, with aching legs and with my riding mates singing all around me. It was magic and I wanted to stay in the moment for the longest time. For the longest day.

See the film from our venture here: https://vimeo.com/136841577
Read more blogs about The Longest Day at Rapha: http://pages.rapha.cc/stories/the-longest-day